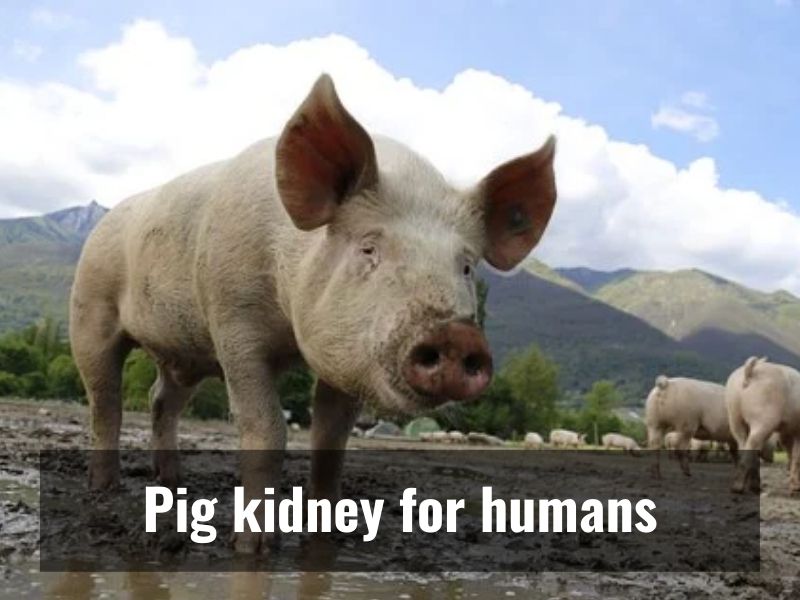 A US medical team has succeeded in temporarily attaching a pig’s kidney to a person, a transplant breakthrough hailed as a “potential miracle” by the surgeon who led the procedure.

The surgery, carried out on September 25, involved a genetically modified donor animal and a brain dead patient on a ventilator whose family had given permission for the two-day experiment, for the sake of advancing science.

“It did what it’s supposed to do, which is remove waste and make urine,” Robert Montgomery, director of the transplant institute at New York University (NYU) Langone,.

Critically, the organ was able to reduce the level of the molecule creatinine, a key indicator of kidney health that was elevated in the patient prior to the transplant.

Montgomery carried out the surgery with several colleagues over the course of around two hours.

They joined the kidney to blood vessels on the top of one of the patient’s legs, so that they could observe it and take biopsy samples.

The patient had wanted to be an organ donor and their family was initially disappointed when told their loved one’s organs were not suitable, said Montgomery.

But “they felt a sense of relief that this was another opportunity for donation,” he said. The patient was taken off the ventilator and passed away following the 54-hour test.

Earlier research has shown that kidneys from pigs are viable in nonhuman primates for up to a year, but this was the first time it had been attempted with a human patient.

The donor pig belonged to a herd that had undergone a genetic editing procedure to knock out a gene that produces a particular sugar, which would otherwise have triggered a strong immune response and led to organ rejection.

The editing was performed by biotech firm Revivicor, a subsidiary of United Therapeutics.

“It is still a question what would happen three weeks from now, three months, three years,” said Montgomery.

“The only way we’re really going to be able to answer that is to move this into a living human trial. But I think this is a really important intermediate step, which tells us that at least initially, things are probably going to be okay.”

He plans to submit the findings to a scientific journal in the next month, and says a clinical trial could take place in around a year or two.

The news was welcomed cautiously by outside experts, who nonetheless said they would like to see the peer-reviewed data before drawing firm conclusions.

“This news is a significant scientific achievement in the xenotransplantation field,” Hynek Mergental, a surgeon at the University of Birmingham in Britain said in a statement.

If confirmed, “it would be a major step forward in the organ transplant field that might solve the critical shortage of donor organs,” he added.

The news comes amid a dire shortage of transplant organs.

According to official US data, there are nearly 107,000 Americans awaiting an organ — 90,000 of whom need a kidney. Seventeen Americans die each day while waiting for an organ.

To meet demand, doctors have long been interested in so-called xenotransplantation, or cross-species organ donation, with experiments tracing back to the 17th century.

Early research focused on harvesting organs from primates — for example a baboon heart was transplanted into a newborn known as “Baby Fae” in 1984, but she survived only 20 days.

Pigs make the ideal donors because of their size, their rapid growth and large litters, and the fact they are already raised as a food source, said Montgomery.

For Montgomery, the research has a personal dimension: he himself was on a waitlist for a heart transplant, which he finally received two years ago.

The technique could one day provide a “renewable source of organs,” much like wind and solar provide sustainable energy, he said.

Dengue cases to increase due to waterlogging post Monsoon: Experts

How to write an essay

Many people want to learn how to write an essay. The truth is, it is much easier than you think. There are many expert essay tutors who can assist you with your task and guide you through the process without much hassle. Here are some suggestions to help you write an essay.

Expert essay tutors can help you write and evaluate your essay. They provide high-quality unique essays and papers for students of all ages. They offer assistance with all types of written papers whether it’s an essay, a research paper, oral argument, or an essay.

Most writing tutors begin by discussing the kind of paper you are writing. This helps the tutor know the direction that the student intends on taking the assignment. For instance, if you are writing a term paper, they might discuss the topics you are considering to write about. The majority of essay writing tutors have a broad range of topics they can help with.

If you are planning to write an essay in a certain native language, for example, American English, they will be more useful. Students who are just beginning to write should consult the dictionaries and other books in their native language. These languages are not the most popular however they are used extensively. Knowing these native words will allow you to know what you’re writing about and write sentences that are punctually correct and flow smoothly.

Many people who require assistance with essay writing often have questions about the topics and subjects they’ll be writing about. Many times, they inquire about the types of reference materials or books they’ll require for their work. In other instances, they might require assistance in writing their arguments. Writing an essay requires the ability to understand and analyse information. It term paper writing help is crucial that you can convey your message clearly and concisely to ensure that your message is understood.

One of the most frequently asked questions about how to write my essay is how to format the essay. Most frequently, questions like this have a simple answer. After you’ve done your research, you can prepare your essay for submission using one of the many formats. You can first send a pdf of your essay to a school or university. The essays are typically scrutinized and reviewed by one person. If there is an error, it’s easy to fix it. You will be acknowledged as the author , and the name of the author will be displayed at the bottom of every page.

Another alternative to writing my essay is to hire an experienced writer to assist you with your essay writing service. Professional writers are familiar with the structure and formatting requirements required to write a quality written assignment. Based on the nature and complexity of your task You can seek assistance from the writer. You could also request an outline to receive an idea of the overall structure. Most writers are very willing to help novice writers at the beginning, and frequently offer suggestions on what should be included in each section. They can also provide excellent tips on how to write an impressive conclusion. Professional writers can also give suggestions on how to construct a unique structure for your essay.

The more you research your question the more likely you will be able to answer it. If you are still unsure about how to write your essay, you could engage a professional tutor or adviser to provide you guidance and write your essays for you. Many students have used the services of a personal adviser or tutor to prepare for their college applications, and you can , too. You might be anxious about beginning your academic journey as a student. However, the more you research your essay, the better you will be in navigating the course of your studies.