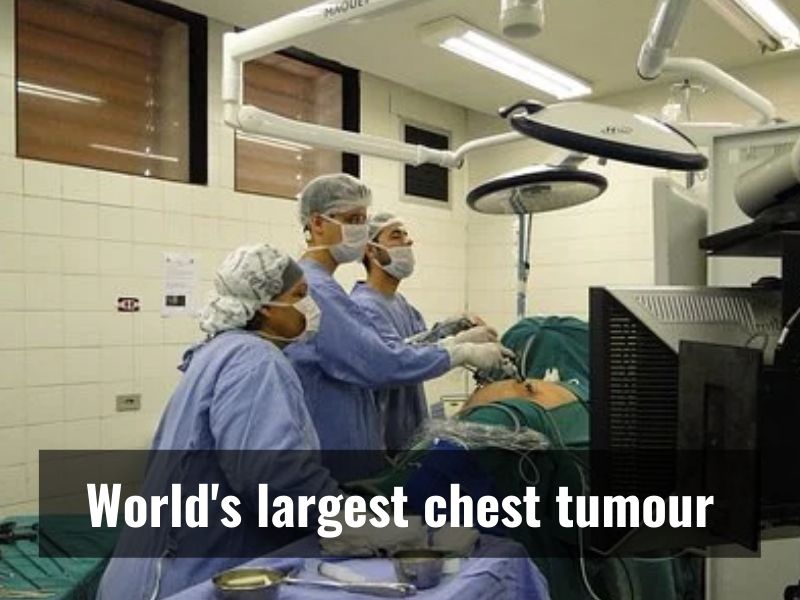 A team of doctors at Fortis Memorial Research Institute successfully removed the world’s largest chest tumour weighing 13.85 kgs from the chest of a 25-year-old male patient.

As per the available medical literature and published papers, the largest chest tumour removed till date, prior to this case, was in Gujarat in 2015 weighing 9.5 kgs, the hospital said in a statement on Thursday.

Patient Devesh Sharma came to Fortis with breathlessness and extreme uneasiness in the chest. He wasn’t able to sleep straight on the bed due to breathing trouble since the last 2-3 months.

An earlier CT scan at another hospital in the city indicated the presence of a massive tumour in the chest. It occupied more than 90 per cent of the chest area, engulfing the heart and displacing both lungs which led to only 10 per cent of the lungs functioning.

In addition, the patient had a very rare blood group, AB negative.

Due to the vast size of the tumour, it could not be removed through minimal invasive surgery. Thus, the Fortis doctors, in a 4-hour long surgery, opened both the sides of the chest and cut the chest bone (sternum) in between.

“In technical terms, we call it clam shell incision. Throughout the procedure, maintaining adequate blood flow was critical. This was a high risk surgery owing to the bulk of the tumour, which had occupied the entire chest making it difficult to operate on multiple vessels as the neck of the tumour couldn’t be controlled and the capsule of the tumour cannot be breached,” said Dr Udgeath Dhir, Director and Head, CTVS, at Fortis, in the statement.

Post the surgery, the patient was shifted to the ICU, and was initially kept on ventilation and later weaned off.

However, the carbon dioxide in his blood started rising owing to which his lungs which had initially contracted started expanding leading to Re-expansion Pulmonary Edema (RPE).

“We tried to manage this conservatively without invasive ventilator support, but after 48 hours had to put him back on ventilator. Considering his condition, we decided to do a tracheostomy, where we created a mini hole in the neck so that we could take out his secretions since he had also developed dense adhesions in his heart,” Dhir said.

“The patient stayed in the ICU for 39 days, post which he was shifted to a room and his tracheostomy was removed. The patient is doing well, and on bare minimal oxygen support. We are happy that he is gradually recovering,” Dhir added.

Does breast cancer occur in men?

How to write an essay

Many people want to learn how to write an essay. The truth is, it is much easier than you think. There are many expert essay tutors who can assist you with your task and guide you through the process without much hassle. Here are some suggestions to help you write an essay.

Expert essay tutors can help you write and evaluate your essay. They provide high-quality unique essays and papers for students of all ages. They offer assistance with all types of written papers whether it’s an essay, a research paper, oral argument, or an essay.

Most writing tutors begin by discussing the kind of paper you are writing. This helps the tutor know the direction that the student intends on taking the assignment. For instance, if you are writing a term paper, they might discuss the topics you are considering to write about. The majority of essay writing tutors have a broad range of topics they can help with.

If you are planning to write an essay in a certain native language, for example, American English, they will be more useful. Students who are just beginning to write should consult the dictionaries and other books in their native language. These languages are not the most popular however they are used extensively. Knowing these native words will allow you to know what you’re writing about and write sentences that are punctually correct and flow smoothly.

Many people who require assistance with essay writing often have questions about the topics and subjects they’ll be writing about. Many times, they inquire about the types of reference materials or books they’ll require for their work. In other instances, they might require assistance in writing their arguments. Writing an essay requires the ability to understand and analyse information. It term paper writing help is crucial that you can convey your message clearly and concisely to ensure that your message is understood.

One of the most frequently asked questions about how to write my essay is how to format the essay. Most frequently, questions like this have a simple answer. After you’ve done your research, you can prepare your essay for submission using one of the many formats. You can first send a pdf of your essay to a school or university. The essays are typically scrutinized and reviewed by one person. If there is an error, it’s easy to fix it. You will be acknowledged as the author , and the name of the author will be displayed at the bottom of every page.

Another alternative to writing my essay is to hire an experienced writer to assist you with your essay writing service. Professional writers are familiar with the structure and formatting requirements required to write a quality written assignment. Based on the nature and complexity of your task You can seek assistance from the writer. You could also request an outline to receive an idea of the overall structure. Most writers are very willing to help novice writers at the beginning, and frequently offer suggestions on what should be included in each section. They can also provide excellent tips on how to write an impressive conclusion. Professional writers can also give suggestions on how to construct a unique structure for your essay.

The more you research your question the more likely you will be able to answer it. If you are still unsure about how to write your essay, you could engage a professional tutor or adviser to provide you guidance and write your essays for you. Many students have used the services of a personal adviser or tutor to prepare for their college applications, and you can , too. You might be anxious about beginning your academic journey as a student. However, the more you research your essay, the better you will be in navigating the course of your studies.